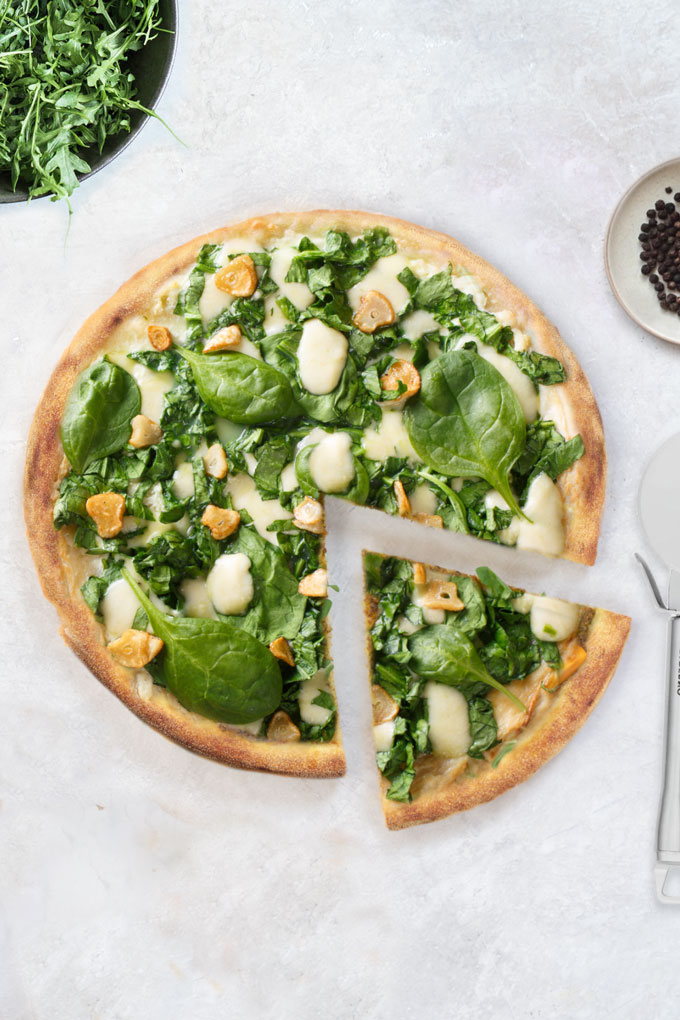 This almond flour pizza crust is crispy on the outside, soft and pillow-y on the inside, and easily carries whatever toppings you want on it. If you're craving homemade pizza without all the carbs, this is it! This pizza crust is vegan, grain-free (paleo), and oil-free.

Homemade bread, buns, and pizza crusts are all enjoying a pandemic-driven renaissance. There's one problem though - no one can find yeast in the stores. So, what do you do when you want to make pizza crust but can't find yeast? Can you use baking soda or baking powder instead? It would seem that since baking soda, baking powder, and yeast are all leavening agents, you could use them interchangeably. However, the process and the speed by which they help baked goods lighten and rise is very different.

Baking soda (sodium bicarbonate) is an alkaline chemical leavener. When it comes into contact with an acidic component, such as lemon juice, vinegar, yogurt, buttermilk, or even coffee, it reacts, and almost immediately produces carbon dioxide. This rather fast reaction is ideal for quick-baked goods, such as scones, muffins, or buttermilk pancakes, where quick leavening is desired. However, it's not ideal for pizza crusts, which benefit from an extended leavening reaction rather than a quick release.

Baking powder is a complete chemical leavener, meaning it contains both the alkaline sodium bicarbonate and an acid. It can be either single-acting or double-acting, with the latter of the two being most commonplace.

Double-acting baking powder contains two acids - mono-calcium phosphate and sodium aluminum sulfate. Mono-calcium phosphate reacts with sodium bicarbonate as soon as it encounters liquid, releasing carbon dioxide and causing an initial lightening as it's mixed. Sodium aluminum sulfate needs a temperature of at least 140°F/60°C to get activated, so it doesn't react with sodium bicarbonate until it hits the oven. The first reaction is smaller and only begins the process of forming gas cells. The second reaction in the oven is larger and expands the cells.

Still, there is another, newer type of baking powder — fat-encapsulated baking powder. While this baking powder can be custom-tailored to meet specific applications, the most common of this type is made using a neutralizing blend of sodium bicarbonate and sodium aluminum phosphate that has been fat encapsulated as a means of protecting both the alkaline and acidic portions from pre-reaction. The heat of the oven/baking melts the fat off of the soda and acid, allowing them to react in a much more predictable manner and allowing them to more fully react for complete neutralization of the acid component. It is possible to make a fully chemically leavened pizza crust using a fat encapsulated leavening system. But since there is no yeast for fermentation, the finished crust will be devoid of the characteristic fermented crust flavor.

When you knead pizza dough, you knead oxygen into the dough, which the yeast use up rather quickly, producing gas which is trapped by the dough. Most gas in bread dough is produced within the first hour of fermentation. Then the yeast must switch to making alcohols and acids along with gas and grows more slowly. This gives yeast-risen bread special aromas and tastes. These compounds also affect the structure of the dough, changing the crumb and crust after baking.

The main takeaway here is that chemical leavening can certainly be used in making pizza dough. However, it's definitely not the most ideal.

What provides elasticity, structure, and binding to this pizza crust is psyllium. Psyllium is a form of soluble fiber that works a bit like gluten in traditional baking. It essentially creates a sturdy network with the proteins present in gluten-free flours. It's important to note that psyllium comes in different grades of purity. The higher the purity level, the lighter the psyllium husk. This is why psyllium ranges from brown to off-white color. So, whenever you’re purchasing psyllium, get the highest purity level you can find (so your pizza crust turns out light-colored).

I have talked about leavening agents quite a bit in this post. So, just to summarize - yeast will give you the most authentic pizza aroma and taste. If you're not ok with yeast, the next best alternative would be baking powder. 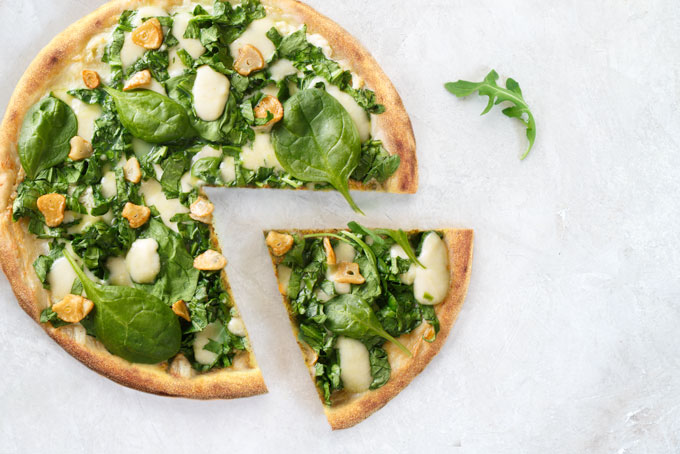 To make the dough, mix the dry ingredients first. Then add the oil and water, and stir until you get a pliable dough. (If you're using yeast, you will need to proof it first). It does take a little bit of time for the psyllium husk to absorb all the water, so the dough is moist at first. However, it gets dryer after about a minute and is really easy to work with.

I like to let the dough rest for a few minutes to let the psyllium absorb all the moisture and create a soft, elastic, and slightly sticky dough. If the dough is too dry or doesn’t bind well, add more water, 1 Tbsp./15 ml at a time.

Compared to classic (white flour) pizza crust, this almond flour pizza crust doesn't rise as much. So, I recommend using your fingers to create the pizza border. The border will slightly puff up in the oven, but not very much.

If you have a pizza stone, use it! It will make the almond flour pizza crust extra crispy. If not, slide the bottom piece of parchment paper with the pizza crust on it onto a baking tray. Bake the pizza crust at 425°F/220°C for 15 minutes, then add your desired toppings, and bake for another 10 minutes. (Adjust the oven time up for a thicker crust or down for a thinner one).

Everyone in my family LOVES pizza! To keep it interesting, I rotate not only the sauce and toppings, but also the crust. In addition to this almond flour pizza crust, I also make pizza crust out of legumes (red lentils, yellow, lentils, chickpeas ...), and quinoa pizza crust (I have yet to share this recipe). The great thing about the legume-based pizza crust is that it requires no kneading or rolling. All you need to do is just pour the batter (yes, batter!) into a pan and bake. You can make the pizza crust as thin or as thick, as crispy or chewy as you like. 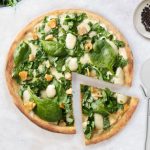 This almond flour pizza crust is crispy on the outside, soft and pillow-y on the inside, and easily carries whatever toppings you want to give it. If you're craving homemade pizza without all the carbs, this is it! This pizza crust is vegan, grain-free (paleo), and oil-free.
Prep Time10 mins
Cook Time25 mins
Servings: 8 slices

*The finer the almond flour, the softer the pizza crust will be.
**You can substitute the baking powder for 2 tsp. active dry yeast. You do not need any sugar to activate the yeast. A pinch of sugar will make yeast bubble up, thus proving that the yeast is still active and hasn’t expired. However, it doesn’t actually help the rising of the crust.
***Nutrition information is approximate and may contain errors. Please, feel free to make your own calculations.
***Nutrition information is calculated without optional ingredients.
Nutrition Facts
Almond Flour Pizza Crust
Amount Per Serving (1 of 8)
Calories 74 Calories from Fat 27
% Daily Value*
Fat 3g5%
Carbohydrates 10g3%
Fiber 8g33%
Sugar 1g1%
Protein 2g4%
* Percent Daily Values are based on a 2000 calorie diet.