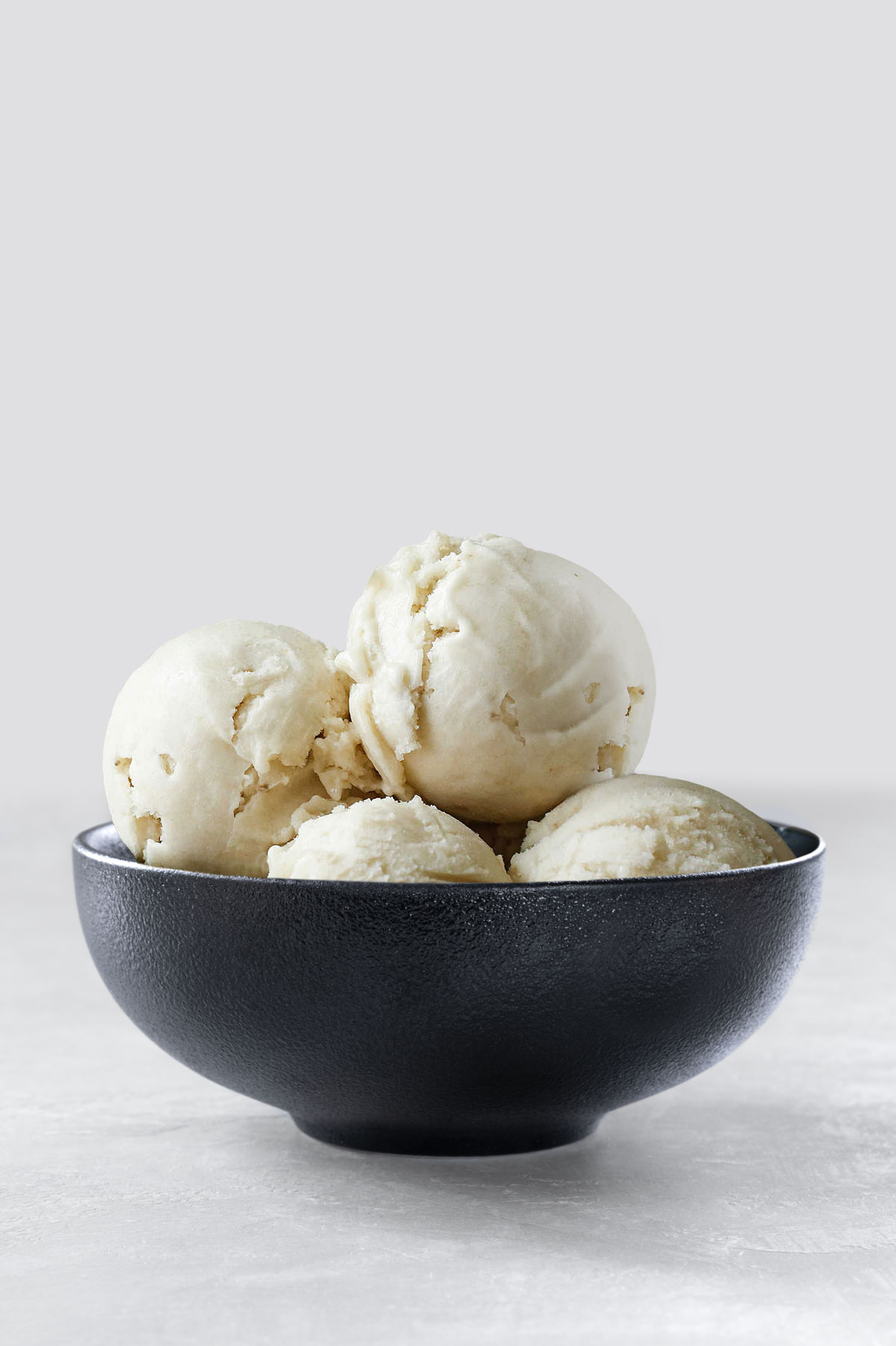 Homemade ice cream is great, but not everyone has the space or the budget for a machine. Fortunately, you can make your own ice cream at home without an ice cream machine.

Anyone who has ventured down the ice cream aisle at the grocery store has probably noticed the prevalence of ice cream advertised as churned or slow-churned or double-churned or Xtreme-churned... So, what exactly does churning do?

Any successful no-churn ice cream recipe needs to mimic the effects of churning.

Since no-churn ice cream doesn't rely on motion to reduce the amount and size of ice crystals that develop during the freezing process, the trick is to use ingredients that contain the right amount of water, to begin with.

The three most popular ingredients for making no-churn ice cream base are:

The third method is where banana ice cream comes in.

The two exceptions are:

So, taking a banana ice cream and trying to repurpose it for an orange creamsicle will easily result in an ice storm. However, you can blend other fruits into the nice cream base to change up flavors. The best fruit, again, is with relatively low water content, including:

While experimenting should be part of the fun of homemade nice cream, it’s important to know your ingredients and the role of each before diving in.

The Science Behind Banana Ice Cream

Sugar (added or naturally occurring) is an essential ingredient in ice cream making. Sugar attracts water, lowering the temperature at which ice forms and thus reducing the presence of ice crystals. Too much sugar and your ice cream will be liquid; too little and it will be rock hard. Bananas contain up to 13% sugar, which is one of the highest in terms of fruit. However, the sugar content is not so high that bananas wouldn't freeze.

Pectin is a type of fiber found in the walls of cells, waiting to bond together to form sturdy gels. So much so that if you add bananas to strawberry jam, you can omit the pectin that you would otherwise need to add. As the blades slice through the frozen bananas, pectin chains form and get in the way of otherwise growing ice crystals. The result is lusciously creamy soft-serve ice cream.

All together combined - low water content, high sugar content, and high pectin content - is why bananas are a bit of a magical ingredient. No other fruit behaves the same under the crush of a blender blade.

Since nice cream is a dessert made from frozen bananas, the main (and sometimes only) ingredient you'll need for this recipe is bananas! 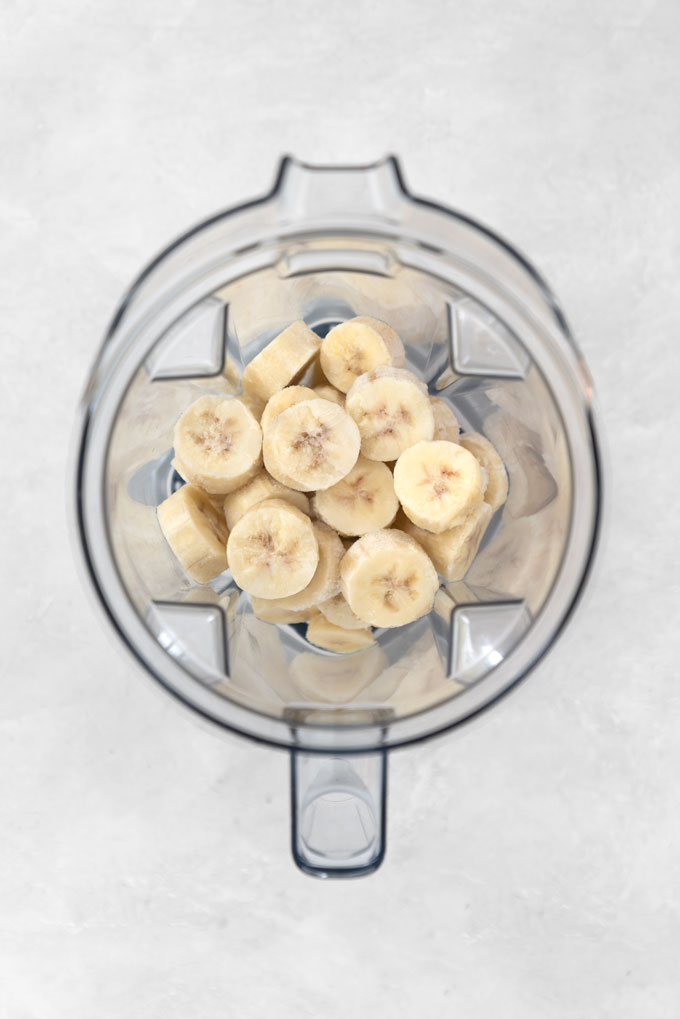 How to Make Nice Cream

No ice cream is truly instant (well, unless you have your own liquid nitrogen), but no-churn ice cream is about as fast as it gets. To make banana nice cream, you only need a couple of frozen bananas and a powerful high-speed blender (or a food processor). Here is the step-by-step process for making banana ice cream: 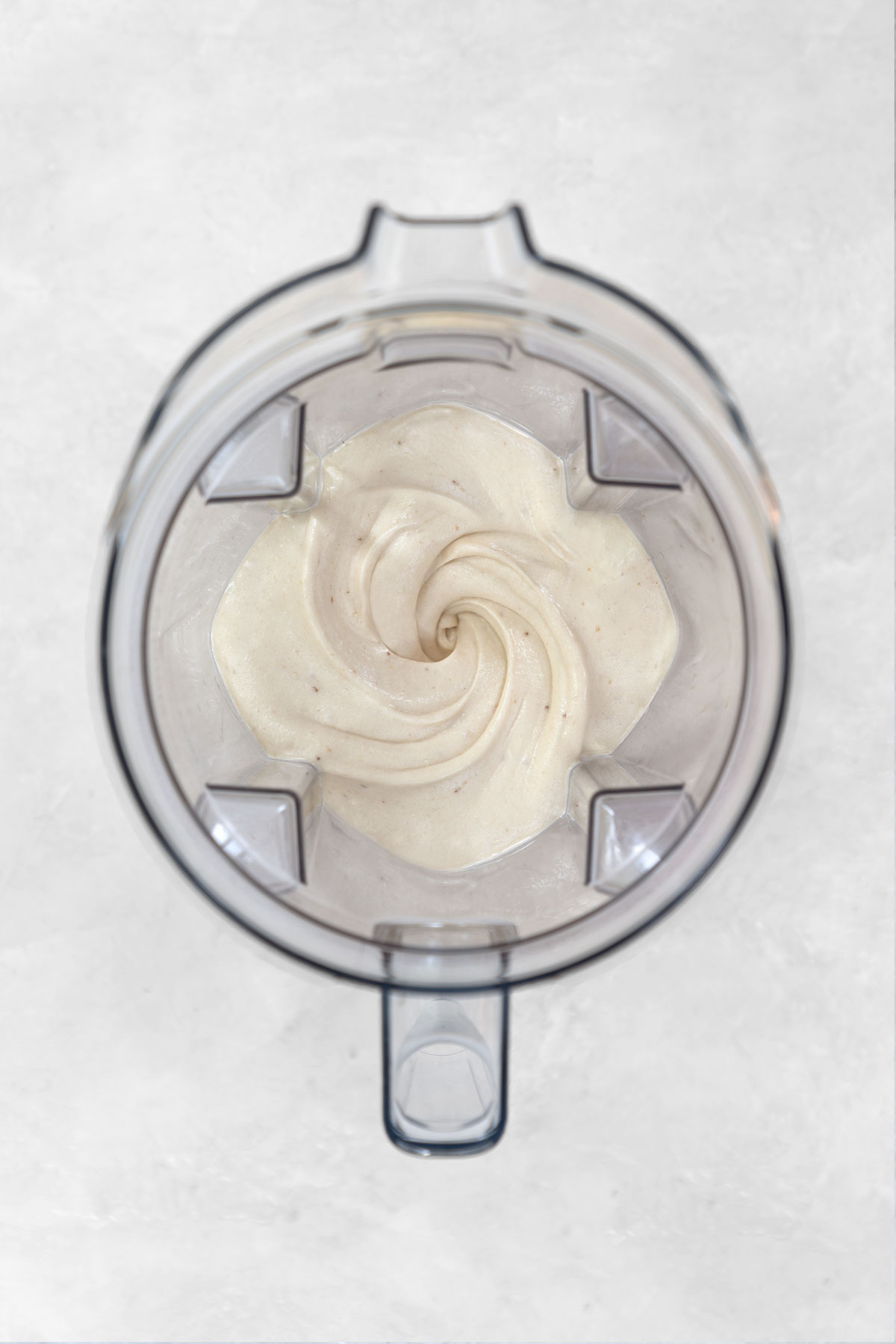 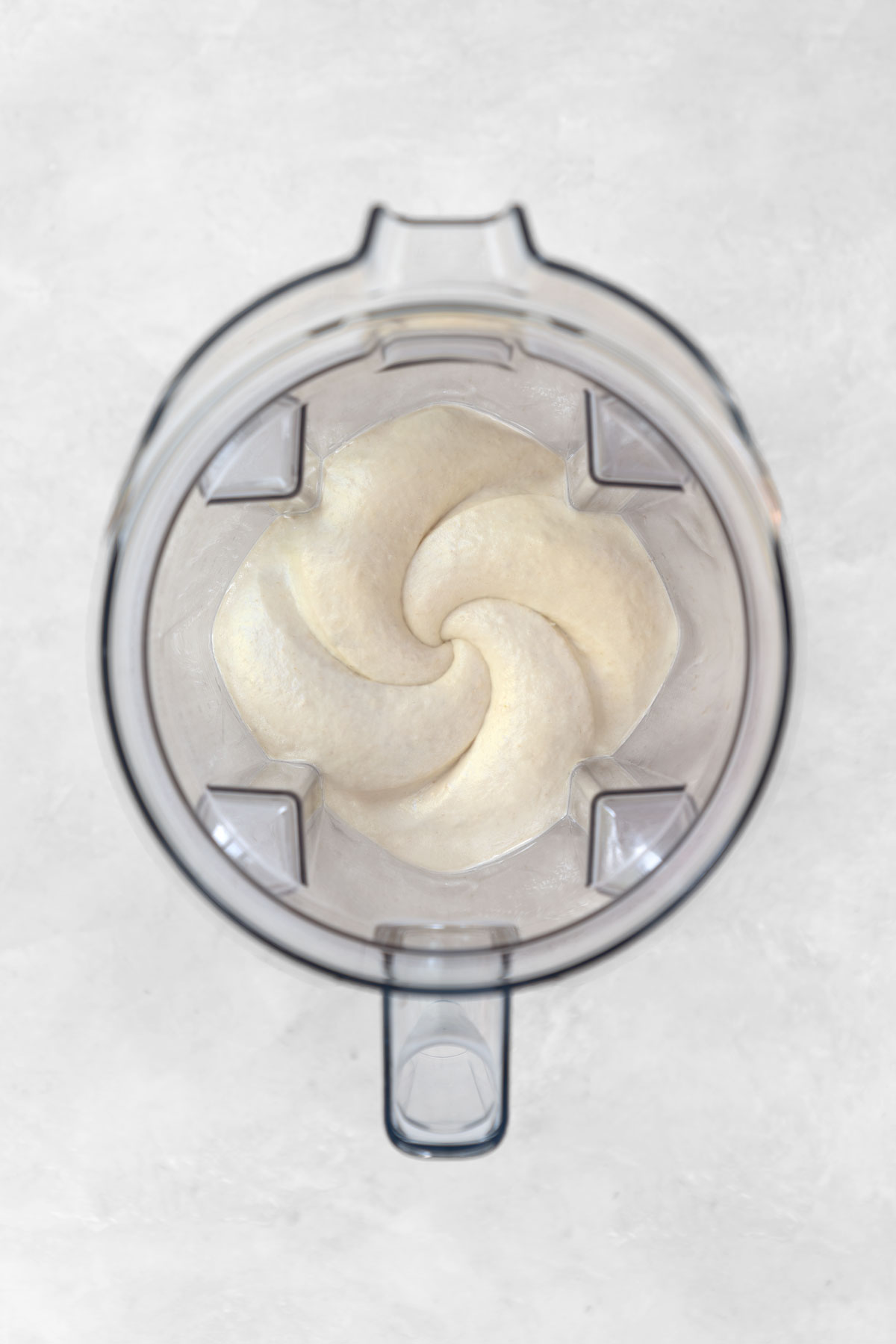 How to Serve Nice Cream

Since banana ice cream is no-churn and contains no added fat or sugar, it hardens as it freezes.

You can freeze it for an hour or two for a firmer, scoopable consistency, but anything longer will yield a rock-solid ice cream. So, serve nice cream right away, ideally straight out of the blender.

If you made too much and would like to save the leftovers, you can put the nice cream in the freezer for later. However, you will need to break it up and blend it again when you want to serve it. It will be just like soft-serve ice cream as soon as it’s blended. 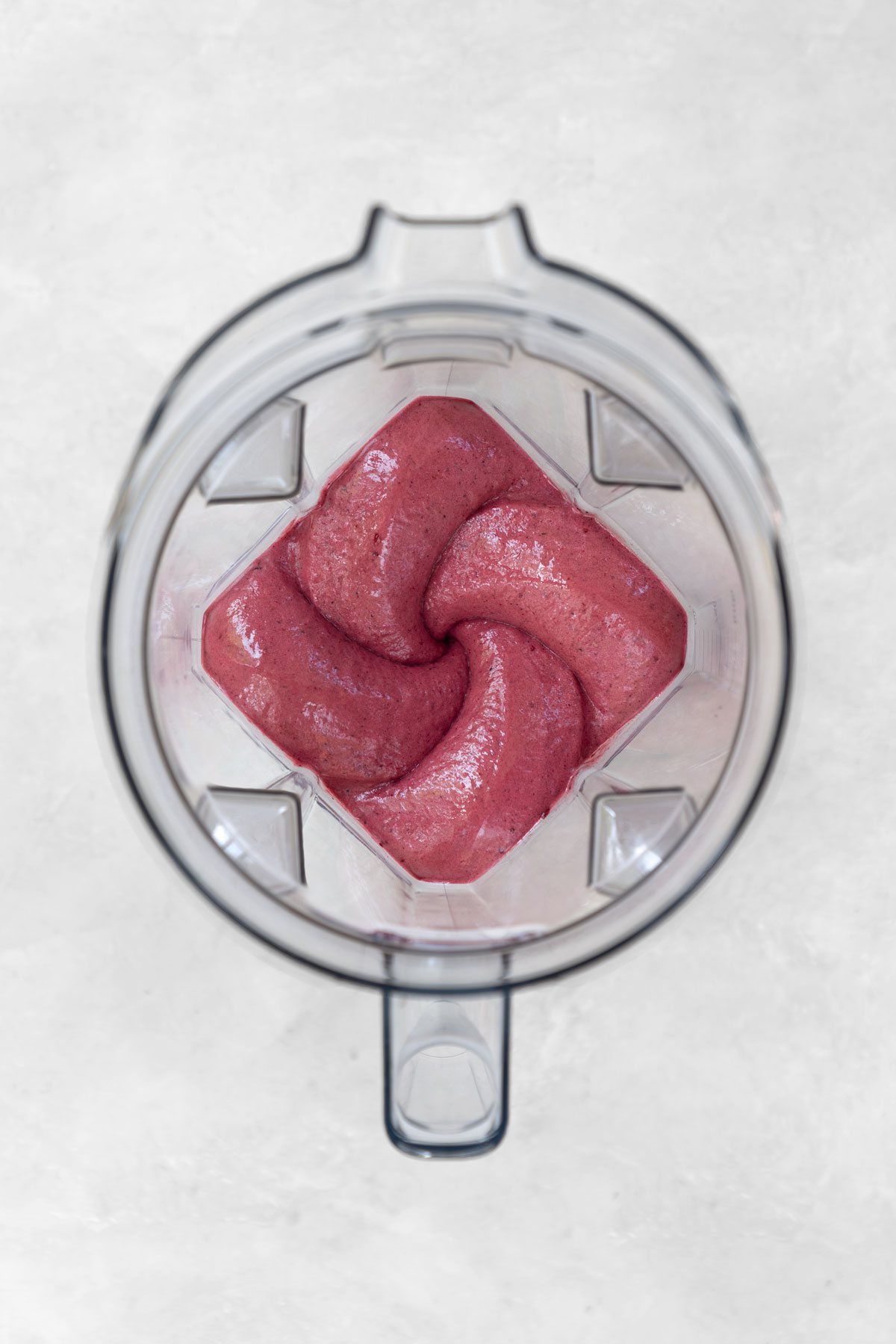 Once you’ve got the basics down, there’s no end to the nice cream combinations you can whip up. Keep in mind that the measurements below are just suggestions, so be sure to taste the nice cream as you go and adjust the flavoring until it tastes perfect to you.

There are multiple ways to add flavor directly to the banana base - fruit, nut butters, extracts, superfoods, alcohol, spices, etc. Here are 20 popular flavor ideas you can try to mix things up.

To take banana nice cream to the next level, don't forget to add toppings. Some of my favorites are:

Other than ice cream, bananas are also an excellent addition to sorbets. Compared to ice cream, sorbets are lighter, icier, and more refreshing: 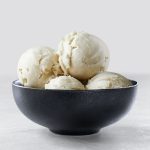 *Cut the bananas into 1-inch/2.5-cm thick slices. Arrange the slices in a single layer onto a parchment paper-lined baking sheet and freeze until firm, 3-4 hours.
**Prep time does not include freezing the bananas, about 4 hours.
***Nutrition information is approximate and may contain errors. Please, feel free to make your own calculations.
Nutrition Facts
Banana Ice Cream (Nice Cream)
Amount Per Serving (1 of 2)
Calories 105 Calories from Fat 4
% Daily Value*
Fat 0.4g1%
Carbohydrates 27g9%
Fiber 4g17%
Sugar 13g14%
Protein 1.5g3%
* Percent Daily Values are based on a 2000 calorie diet.