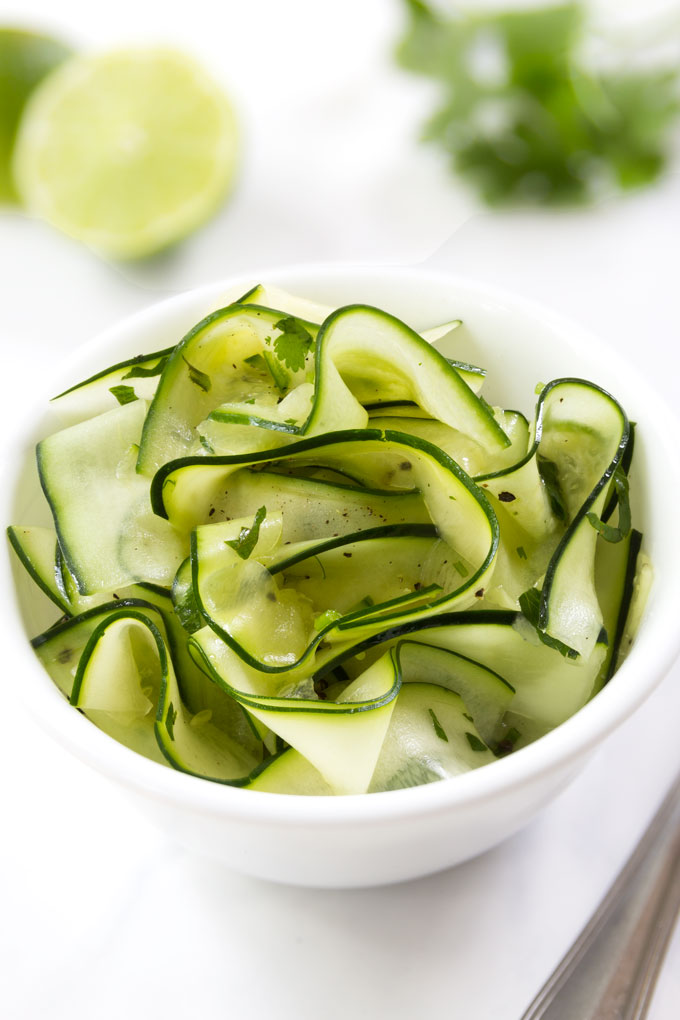 This cucumber zucchini salad is flavorful, crisp, refreshing, and light. It makes a perfect light dinner on a hot summer day or just a quick side dish for BBQs and summer parties.

Thanks to Whole Foods, I can buy organic blueberries even when it’s -10°C outside. I also enjoy ice cream smoothies and raw green salads throughout the year, no matter what the temperature is. It tastes so good, but sometimes it feels a bit wrong. Is there a reason health gurus tell us to eat seasonal local produce? Absolutely! It all goes to the balance of yin and yang, or warm and cool.

In our Western diet, foods are evaluated for protein, calories, carbs, vitamins, and other generic values. But in the Chinese diet, it’s color, energy, and flavor that matter. Just like the weather, the seasons and even the time of day influence what happens in our bodies. So does the energy of the food we eat. Some foods have a cooling energy (leafy greens, cucumbers, snow peas, radishes, tomatoes, watermelons, etc.); some foods have a warming energy (root vegetables, pumpkins, turnips, squashes, onions, and cherries).

Cooking a raw food will often change its energy and cause it to have a warming effect on the body. You can take an apple (a cooling fruit) and bake it (a warming cooking method) with cinnamon (a warming herb) and this will warm the apple’s energetic effect. In the same way, you could take a carrot (a warming vegetable) and steam it (a cooling cooking method), which will change the carrot’s energetic effect. The temperature at which you serve the food doesn’t always matter though. Some foods are warming without ever being cooked (garlic, avocado, coconut, most nuts and seeds). Some foods are cooling even when cooked (tofu, vegetable broths, or steamed leafy greens).

The point I am trying to make is that the foods we eat affect the way we feel. When the weather outside is hot, we naturally prefer cooling foods and gravitate towards cooling cooking methods. When it’s winter, warming foods are what we begin to crave. That’s exactly how it should be.

Since it’s still hot outside, I thought I would share with you a very easy cucumber zucchini salad. It’s made from raw cooling vegetables and it’s perfect for the summer! 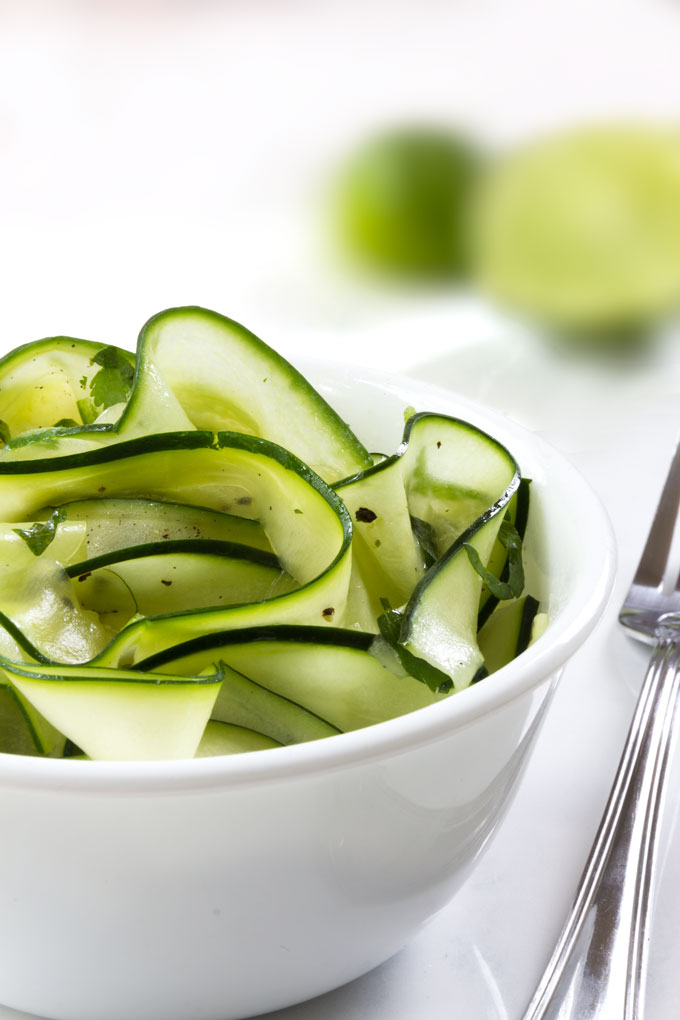 The main two vegetables in this salad are cucumbers and zucchinis. These two rather dull vegetables work together beautifully in terms of texture. The cucumbers have a light, crisp, and crunchy texture, which compliments the meaty texture of zucchinis perfectly. While there is a whole lot of cucumber varieties, I would recommend that you stick with Persian or English. These two varieties are both prized for being thin-skinned — so they don’t have to be peeled — and are pretty much seedless. I prefer Persian (also called Lebanese) cucumbers because they are extra crisp (rather than watery) and have a mild, sweet flavor.

The dressing is what elevates this simple salad to a new level. It’s salty, tangy, and a little bit spicy. If you’re not a fan of spicy food, swap the jalapeno pepper for green bell pepper. For am even more spicy salad, go for serrano pepper. 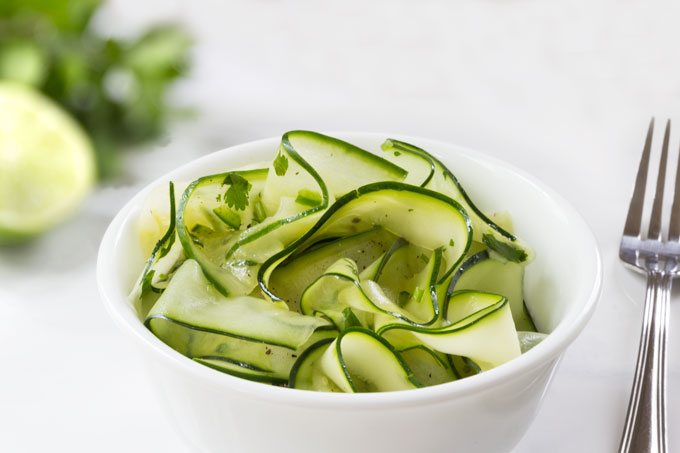 My favorite tool to slice the cucumbers and zucchinis is a mandolin. However, I understand that for many people mandolin is quite intimidating. So, feel free to use a food processor or a simple chef’s knife to slice the veggies if you like.

Nutrition Refined is a participant in the Amazon Services LLC Associates Program, an affiliate advertising program designed to provide a means for us to earn fees by linking to Amazon.com and affiliated sites — at no extra cost to you. Thank you for your support.

*You can swap 2 Persian cucumbers for 1 English cucumber.