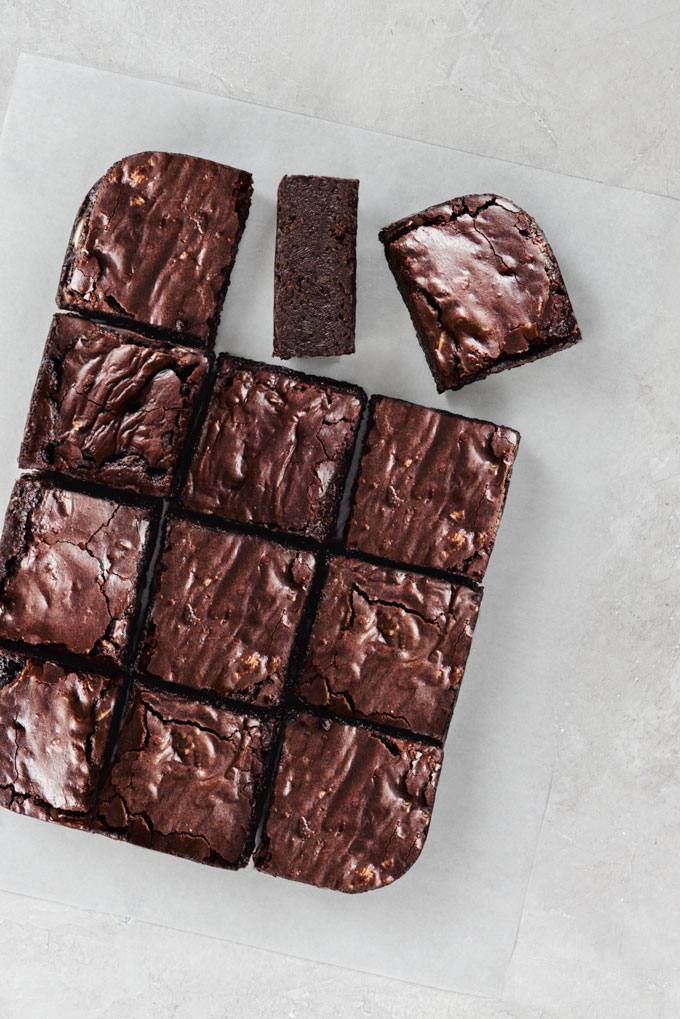 Who wouldn’t like an easy brownie recipe? These brownies are gooey, dense, rich, and super chocolaty. The fudgy interior along with the crispy crinkle top is a combination that sends these brownies over the top. They are vegan, grain-free, and refined sugar-free.

I haven’t met a person who wouldn’t love brownies. Classic chocolate, swirled with cream cheese, infused with mint, spiked with booze, topped with frosting  … there are so many flavor combinations and each one brings something unique to the table. Even more important than the flavor seems to be the texture – dense-fudgy, soft-chewy, or fluffy-cakey. One isn’t necessarily better than the other, but it’s important to know how to achieve the result you’re after.

So, let’s explore the three main types of brownies and what makes them different.

Fudgy brownies are for true chocoholics. They have an intensely rich chocolaty flavor and a gooey, super-moist texture. The fudgy texture comes from a high fat content, specifically from oil (as opposed to butter) and real chocolate (as opposed to just cocoa powder). Neither cooking oils or chocolate aid in aeration, so the brownies stay decadently fudgy and moist. To create the fudgiest brownies ever, chef’s use a whisk to prevent air from getting into the batter, and transfer the brownies straight from the oven into the refrigerator until ready to serve.

Chewy brownies are likely the ones you know. They are moist but not quite as gooey as fudgy brownies. The chewiness comes mainly from protein (gluten) and unsaturated oils. To ensure chewy brownies don’t fall too deeply into the fudgy category, they often rely on cocoa powder rather than real chocolate. Perhaps most importantly, chewy brownies should be slightly under-baked and refrigerated until ready to serve.

Cakey brownies have a fluffy, airy, light interior just like, well, a cake. The fat content is the lowest while the amount of carbohydrates (coming from low-protein cake flour) is the highest. The addition of both baking soda and baking powder lifts the brownies and form a more cake-like dessert. For extra cakey brownies, it’s best to use an electric mixer to get as much air in as possible, and bake the brownies for a few extra minutes.

Note: the recipe included in this article is for fudgy, slightly chewy brownies. 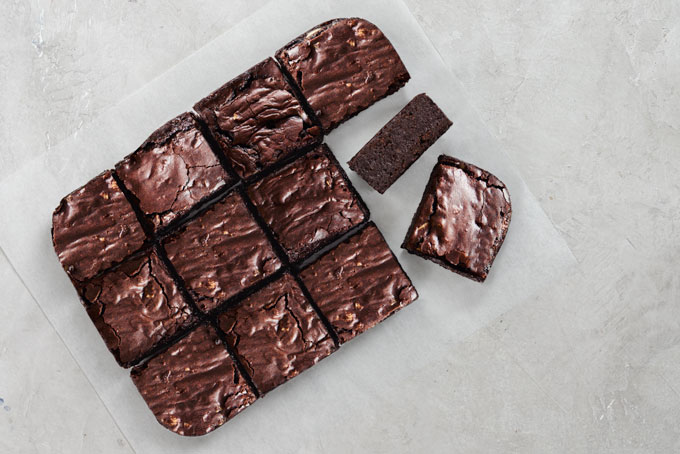 As I mentioned above, fudgy brownies rely on a lot of fat, which reflects in the ingredients for this easy brownie recipe, specifically hazelnut flour, hazelnut butter, coconut oil, and chocolate. I used hazelnut flour and hazelnut butter just because I had a lot of hazelnuts on hand, but you can use almonds, cashews, pecans … I think that sunflower seeds would also work if you need a nut-free version.

If you don’t have any real chocolate, you can omit it (or use cacao nibs). I have made these brownies with just cocoa powder and they turned out perfectly fine. If you have the option, go with dutch process cocoa powder, which provides a deeper, smoother chocolate flavor than natural cocoa powder.

To sweeten the brownies, I recommend coconut sugar. Coconut sugar comes from coconut tree sap and has a lower glycemic index than most sweeteners. It has a distinctive flavor similar to brown sugar with a hint of caramel, which complements these brownies really well. 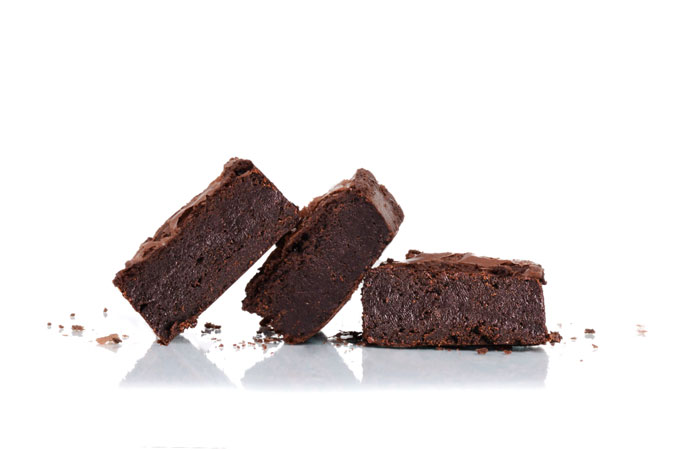 There’s nothing complicated about these brownies (hence the “easy brownie recipe”). If you have all the ingredients ready, simply mix everything in a bowl until you get a thick batter. You’ll get a sense of how dense these brownies are when you’re mixing up the batter. It’s so thick and so fudgy.

Brownies are one of my favorite dessert. I have been experiment with different brownie recipes, and keep coming back to the three listed below.

The first recipe is, of course, for these baked brownies – moist, dense, rich, and so chocolaty. They are the fudgiest (somewhere between a rich truffle torte and a piece of fudge) and the least sweet out of all of them. I love the intense chocolate flavor these brownies pack, which is why they are probably my favorite.

The second recipe is for raw brownies with a chocolate topping. The ingredients are very similar to those for baked brownies, but instead of chocolate chunks in the batter, there is chocolate on top. These brownies are not quite as gooey (they are more on the chewy side) and probably the sweetest out of the three. The textural difference of the melty chocolate and chewy brownies is what makes these brownies my husband’s favorite.

The third recipe is for raw brownies with dates and chocolate ganache. The dates provide a fruity sweetness and very chewy texture. You will be totally surprised at how incredibly rich and satisfying these are. I probably make this brownie recipe the most because it’s my kids’ favorite. 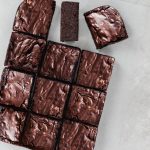 Who wouldn't like an easy brownie recipe? These brownies are gooey, dense, rich, and super chocolaty. The fudgy interior along with the crispy crinkle top is a combination that sends these brownies over the top. They are vegan, grain-free, and refined sugar-free.
Prep Time15 mins
Cook Time28 mins
Total Time42 mins
Servings: 16 brownies