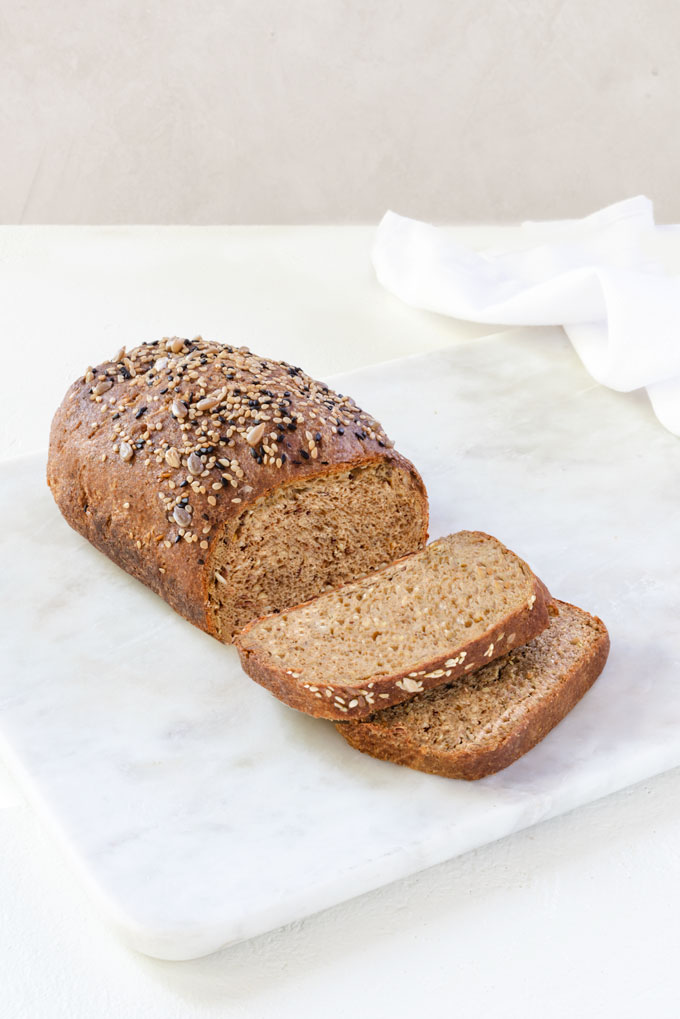 This flaxseed bread (linseed bread) is dense, soft, and moist. It's free or any grains and pseudo-grains. In fact, the only ingredient in this flaxseed bread are ground flaxseeds (linseed). So, it's a great low-carb alternative to your regular bread.

You can serve this bread as is, but it also makes for a fabulous toast. I usually eat it with some sprouted hummus and greens, but simple vegan butter is great too.

Sometimes I am reluctant to post 1-ingredient recipes because they are so simple...but I think that's the point. Sharing ways you can make cooking easier and faster. Cooking for a family of four every single day is no joke. So, if I can get away with simple recipes, I take it.

But before I share this flaxseed bread recipe with you, I want to address some questions I frequently get about flaxseeds. (I have gotten a lot of questions about flaxseeds since I first posted these flaxseed tortillas and flaxseed crackers).

There is no question that flaxseeds offer a plenty of health benefits. They are high in omega-3 fatty acids, fiber, and plant lignans. But are they safe to eat? Can you overdo a good thing?

How Much Flaxseed Is Safe to Eat?

So, how much flaxseed is safe to consume? While I'm sure the recommendations vary (depending on how balanced your overall diet is), Health Canada recommends a daily intake of 40 grams (5 Tbsp.) of milled flaxseed. (1)

Is It Safe to Cook with Flaxseeds?

Yes, it is perfectly fine to cook and bake with flaxseeds and/or flaxseed meal. While flaxseed oil should not be heated because it can easily oxidize and lose too many of its valuable nutrients, it appears that heat does not have the same effect on whole/ground flaxseeds. Flaxseeds contain a high concentration of alpha-linolenic acid (ALA) and lignan phytonutrients, which are surprisingly heat stable. In fact, multiple studies — in reputable publications like the Journal of Nutritional Biochemistry, the British Journal of Nutrition, and the American Journal of Clinical Nutrition — have concluded that the Omega-3 fatty acids in flaxseed are resistant to oxidation even when cooked for 60 minutes at 660°F (350°C).

Flaxseed is the richest dietary source of lignans, a type of phytoestrogen (somewhat similar to the female hormone estrogen). While human estrogen is vital for the growth and regulation of the female reproductive system, excessive exposure to this hormone is linked to certain health conditions, including breast cancer. This has prompted concern that the estrogen effects of flax may impact blood levels.

However, research published in the May 2014 issue of Integrative Cancer Therapies, concluded that flaxseed consumption in women either had no impact, or caused a decrease in blood levels of estrogen.to date shows that adding flaxseed to the diet either reduces, or has no significant impact on body levels of estrogen. (2) In fact, the lignans found in flax may inhibit aromatase, an enzyme which produces estrogen. (3) 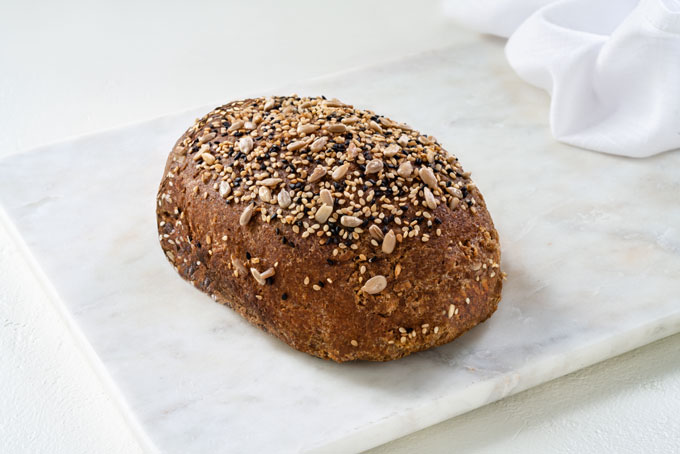 What makes this bread rise is water turning into steam inside of the loaf. (This is why it's critical to bake the bread in a really hot oven). However, I have to admit I am still working on getting it right every single time. So, if you're a beginner, feel free to use a leavening agent, such as baking powder and baking soda with an acid. The reason for both is more leavening. Baking soda is about 3-4x stronger than baking powder. However, more baking soda in a recipe doesn’t necessarily mean more lift. You want to use just enough to react with the amount of acid in the recipe. Too much baking soda and not enough acid means there will be leftover baking soda in the recipe. You do not want that; it creates a metallic, soapy taste.

If you don't use any salt, the flaxseed bread tastes quite bland. I usually use just salt, but if you wanna be creative, add any of your favorite herbs or spices. 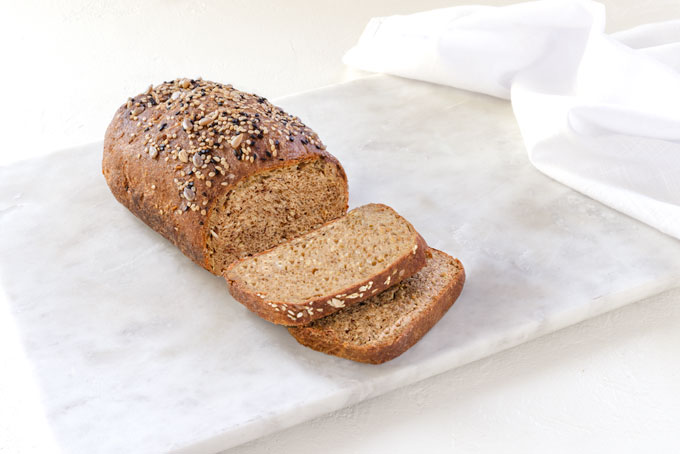 What sets this flaxseed bread recipe apart from most other bread recipes is the unusual quick and simple making process. This recipe requires less time than nut & seed bread or flaxseed crackers. There is no bulk fermentation or proofing involved. No soaking, no kneading, no rising. All you need to do is mix the ingredients. Be careful not to over-knead the dough. If you knead the dough too much, the flaxseeds will start releasing their oils, which will prevent sticking.

If you're using the leavening agents, particularly the baking soda, you'll need to work fast. When you mix baking soda (base) with apple cider vinegar (acid), you get a chemical reaction. A product of this reaction is carbon dioxide, producing a lift in your baked goods. The reaction starts as soon as the base and the acid are mixed. So, get the bread in the oven immediately after you mix the two, before the reaction tapers off. 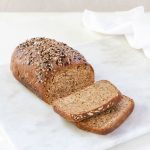 *I grind my own flaxseed meal in a Vitamix. You will need ~ ⅔ - ¾ cup whole flaxseeds to get 1 cup flaxseed meal. Grind the flaxseeds into very fine flour. If you're using store-bought flaxseed meal, make sure it's finely ground. I recommend sifting the flaxseed meal for best results.
*Even though I include imperial measurements, it's really important to actually weigh the flaxseed meal and water.
*While you can use brown flaxseed meal, the bread turns out MUCH darker than when you use golden flaxseed meal. So, I definitely recommend using golden flaxseed meal.
**The baking powder, baking soda, and apple cider vinegar help the bread rise. The bread works without the leavening agents as well though. The recipe has been adapted from Dr. Sarah Myhill's book The PK Cookbook.
Nutrition Facts
Flaxseed Bread
Amount Per Serving (1 slice)
Calories 77 Calories from Fat 45
% Daily Value*
Fat 5g8%
Carbohydrates 5g2%
Fiber 3g13%
Sugar 1g1%
Protein 3g6%
* Percent Daily Values are based on a 2000 calorie diet.