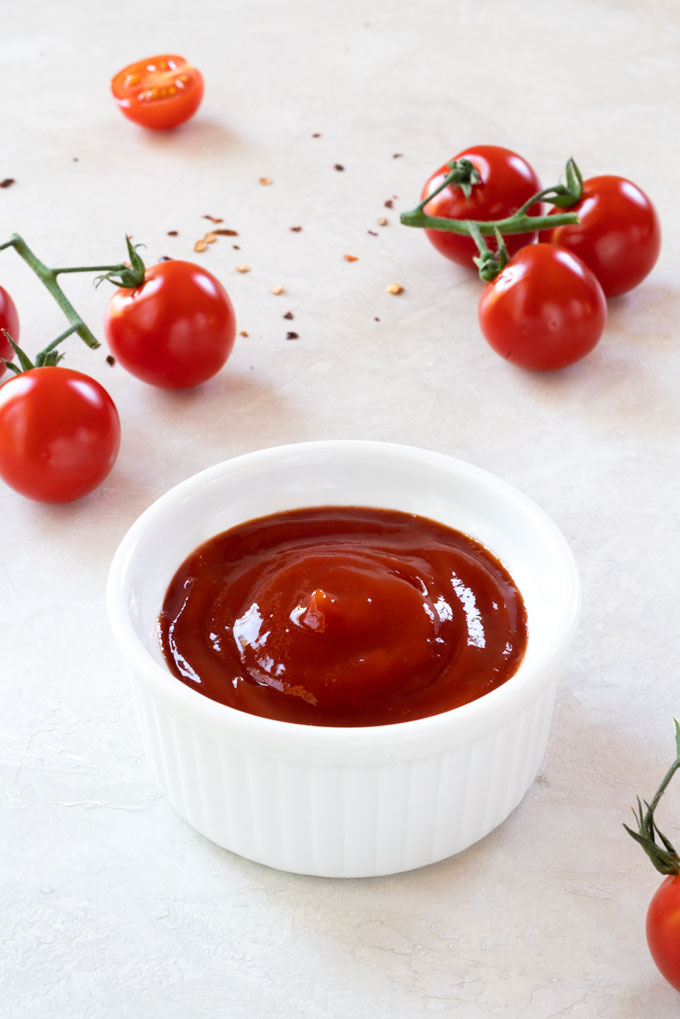 This homemade ketchup is about as simple as it gets. Yet, somehow it's much more flavorful than anything you can buy at the store. It's tangy, it's sweet, it's got that thick-yet-flowy texture. It's naturally vegan, paleo, and easily customizable for those on a keto diet.

I never buy ketchup. Ever. Not only does store-bought ketchup have no nutritional value, but nobody in our family actually eats it. My husband (Tanner) puts hot sauce on everything instead, my children think that anything resembling red sauce is too spicy (I am sure they will come around), and my parents who come to visit from time to time don't like anything with tomatoes.

Personally, I have nothing against tomato ketchup. However, when it comes to stocking the kitchen, I try to buy mostly ‘one-ingredient’ items. Yes, this means making my own ketchup. It does take a little more time than grabbing a ketchup bottle in the store, but the taste, texture, and flavor of homemade ketchup blows store-bought ketchup out of the water!

You have never really tasted ketchup until you have made it yourself, in my opinion. So, let me share with you a really easy ketchup recipe. 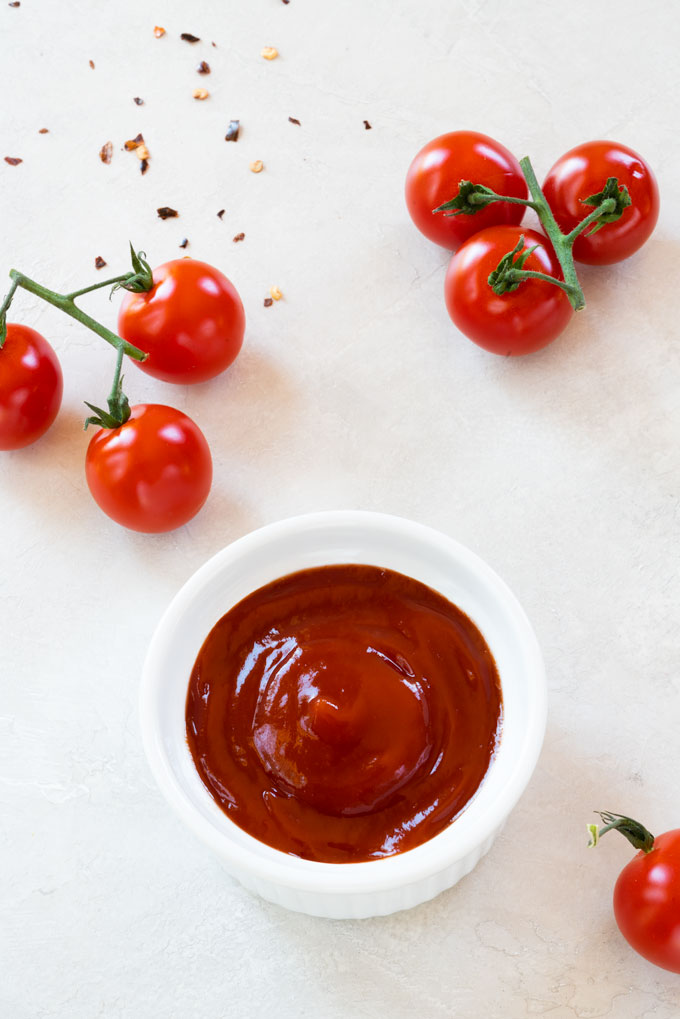 There are hundreds of tomato varieties. From marble-sized grape or cherry tomatoes, to juicy salad tomatoes, meaty paste tomatoes, and huge beefsteak tomatoes. Their colors range from deep crimson to orange, yellow, green, purple, and chocolate. The flavor profiles are very diverse as well - sweet, citrussy tart, acidic, or even smokey.

While there isn't just one variety of tomato that's best for homemade ketchup, paste tomatoes (such as Roma or San Marzano) have characteristics that are the most desirable for making salsas, sauces, and pastes. They are thick-walled, lack a central core, have few seeds, and are meatier than other tomatoes. A non-paste tomato is so juicy (i.e., watery) that cooking evaporates almost its entire substance, along with its flavor. The opposite happens when you reduce paste tomatoes - rather than boiling their qualities away to nothingness, you approach their essence.

Some say that paste tomatoes are relatively mild in flavor, but that's a good thing. Not only does the flavor intensify as you condense the tomatoes into a sauce, but a mild tomato makes sauces that don’t overpower the flavor of the rest of your ingredients.

To make more than just a tomato sauce, you will also need a sweetener (I prefer maple syrup to achieve that flowy texture), apple cider vinegar (or any other acidic medium), and spices. The great thing about homemade ketchup is that you can use any spices you like. I always use allspice and celery salt. My husband likes chili flakes (anything spicy, really). It's up to you.

I should also mention that tomatoes should be eaten in moderation on a ketogenic diet.  They do contain higher amounts of natural sugars and carbohydrates that can kick you out of ketosis if eaten in excess. However, tomatoes also have nutritional benefits that should not be ignored. One of the greatest ways to get some of these benefits and still remain in ketosis is having a little bit of this keto ketchup. Sugar-free ketchup is richer in flavor than plain tomatoes, more concentrated so you can use less, yet it still contains the same nutrients and compounds such as lycopene, a powerful antioxidant. 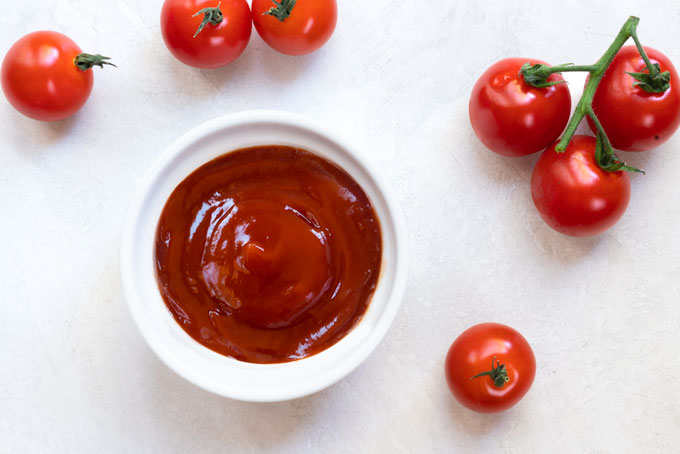 The secret to naturally sweet, full-flavored ketchup lays in roasting the tomatoes. Roasting concentrates and caramelizes the sugars, making the tomatoes sweeter in the process. It also boosts the color of the tomatoes.

The next step involves sauteing the aromatics and spices. I also like to add the roasted tomatoes into the saucepan with all the other ingredients, because the flavor integrate so much better when they have a chance to simmer for at least 30 minutes. If you' thinking about using canned tomatoes, I wouldn't recommend it. The calcium salts that keep canned tomatoes from being pummeled to a mush during processing and shipping, also prevent them from disintegrating so lusciously when cooked.

After about 30 minutes, add all the ingredients into a blender and blend until smooth.

Many people think of ketchup as solely a condiment for burgers or a dipping sauce for fries. However, it's also a key ingredient in many recipes. I use it as a base for a lentil loaf glaze and homemade barbecue sauce, sneak it into the tomato sauce for meatballs from time to time, and even add it to baked beans. 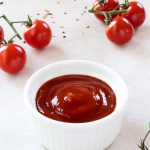 This homemade ketchup is about as simple as it gets. Yet, somehow it's much more flavorful than anything you can buy at the store. It's tangy, it's sweet, it's got that thick-yet-flowy texture. It's naturally vegan, paleo, and easily customizable for those on a keto diet.
Prep Time10 mins
Cook Time30 mins
Total Time40 mins
Servings: 48 Tbsp.

*Up to ⅓ cup (80 ml), depending on how sweet your tomatoes are.
Nutrition Facts
Ketchup
Amount Per Serving (1 of 48)
Calories 0
* Percent Daily Values are based on a 2000 calorie diet.