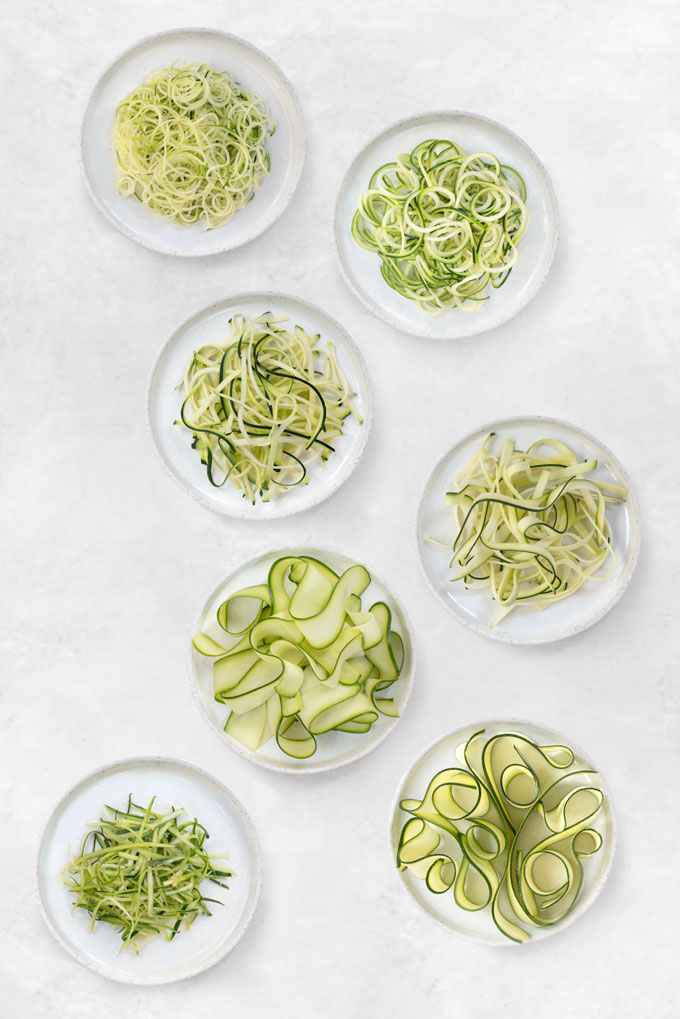 Zucchini noodles (also called "zoodles") are the perfect low-carb pasta. In this guide, I share everything you need to know about noodles made from fresh zucchini - how to make them (using a spiralizer, mandoline, vegetable peeler, julienne peeler, box grater, and a chef's knife), how to cook them (should you even cook them?), and my go-to zucchini noodle recipes. My goal for this post is to show you how to make a variety of noodle shapes using a variety of different kitchen tools and how to cook the noodles perfectly every single time, regardless of the cooking method,

What Are Zucchini Noodles

Zucchini noodles are the perfect pasta solution for no-cook lunches, light dinners, or any meal to incorporate more vegetables.

Vegetable noodles have certainly grown in popularity over the last decade, especially with the rise of alternative diets that omit grains. Zucchini is arguably the most popular, as it is inexpensive, neutral in flavor, and low in calories.

Just like pasta, zucchini noodles come in different shapes and sizes. The most popular are long noodles, which can be either round or flat. Here is a list of all the noodles you can make with zucchini.

How to Make Zucchini Noodles

Zucchini noodles may seem intimidating to make at home, but with the right tools, it's easy. Unfortunately, there isn't one encompassing tool that would make any type of long "pasta". However, if you have at least one or two of the following, you will be able to make a few different shapes and sizes for sure.

A spiralizer is the best for making long, round zucchini noodles, such as angle hair, capellini, vermicelli or spaghetti. This is because a spiralizer doesn't slice, peel, cut, or grate; rather, turns any vegetable into long, round strands. Well, unless you swap the blade for a flat or wavy slicer blade.

I have worked with a few types of spiralizers - hand-held, countertop, and electric - but currently only own the countertop one. Countertop spiralizers typically offer the best value for money, have the most functionality, and are the easiest to use. That being said, if you can get an attachment to your already existing machine (like a KitchenAid), it will help you save some space and make more consistent noodles. Hand-held spiralizers, while compact, are limited in their functionality and only suitable for occasional use.

Spiralizers work well for both large and small zucchinis as well as other veggies like cucumbers, beets, carrots, sweet potatoes, butternut squash, and even broccoli stalks. Because spiralizers come with interchangeable blades, you can easily make your favorite vegetable noodles, curly fries, or chips.

A mandoline is best for making long, flat zucchini noodles. The widest slicing blade will give you lasagna. However, if you swap the wide blade for any of the julienne blades, you can easily make linguine, fettuccine, tagliatelle or pappardelle. If your mandoline only comes with a wide slicing blade, you can use a sharp knife to cut the wide noodles into thinner ones.

I have had my mandoline for years and it gets used a ton in my kitchen. The model I have comes with 5 interchangeable blades - a fine grater, a coarse grater, a slicing blade, a fine julienne blade, and a thick julienne blade - and a rotating knob to adjust the thickness of your slices.

The blades on the mandoline are super sharp, so slicing any vegetables is a breeze. All the blade options allow for a variety of different shapes, including slices, fries, matchsticks, crinkles, or chips.

With a Vegetable Peeler

A vegetable peeler is best for making long, flat noodles, particularly pappardelle. To make thinner noodles, such as linguine, fettuccine, or tagliatelle, stack the wider noodles on top of each other and cut them into narrower strips with a sharp knife.

There are many types of vegetable peelers, but the best ones are Y-shaped. Quite common are now also 2-sided peelers - one side for slices (strips) and the other one for julienne. I love this option because you don’t need a fancy gadget and get a variety of different noodle shapes. Also, it's really small, so it takes up practically no space.

With a Box Grater

A box grater is great for making long flat noodles. The trick is to hold the grater like a mandoline; that is, put it on the side and move the zucchini lengthwise, in long strokes, across the largest holes of the grater. The thickness of the noodles will be identical to linguine. If you want shorter noodles, hold the grater at an angle instead.

Because the box grater holes aren't razor sharp - certainly not as sharp as a mandoline or a vegetable peeler - it's not ideal for really firm vegetables, such as butternut squash or beets.

While not my favorite method, you can make zucchini noodles with a knife. Ideally, you would use a knife to just cut already sliced zucchini into narrower strips, but you can slice a whole zucchini with a knife too. A sharp chef's knife works the best in this case.

This is definitely the most basic way and can be challenging if you don't have chef's knife skills.

How to Cook Zucchini Noodles

So, now that you have zoodles, what do you do with them?

Cooking zucchini noodles can be tricky because zucchini have an extremely high moisture content. They are over 95% water by weight. That's a lot of water! So, when you cook zucchini, not only do they reduce in size, but they also release a lot of water. The longer you cook the zucchini, the more water they release.

Therefore, the goal is to not exactly cook the noodles, but rather just heat them up, so they soften slightly but retain their al dente texture.

Here are my favorite methods for cooking zucchini noodles.

Zucchini are quite soft, so there is no reason to cook the zoodles. Eating raw zucchini noodles is easy, fast, and really refreshing. So, save yourself some time and toss the noodles in a dressing or sauce raw.

This method is perfect for really thin noodles, such as angel hair, capellini or vermicelli, which overcook easily and quickly lose their al dente bite. To slightly soften the noodles (and draw excess moisture out), place the noodles in a colander, toss them with sea salt, and let them sit for 5-10 minutes. Then, using your hands, gently squeeze the zucchini to release some additional moisture. Don't keep squeezing the noodles to get out every last drop or you will end up with lifeless noodles. Getting most moisture out is just fine.

If you prefer zoodles warm, you can serve them with an already hot sauce, which will heat the noodles through without any actual cooking. 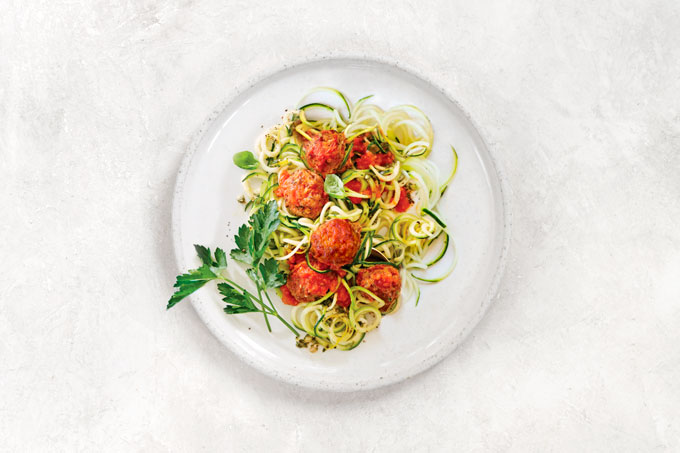 How to Sauté Zucchini Noodles

My favorite method for cooking zoodles is to sauté them. It's fast and if you're already cooking on the stove, it's also the easiest. This method is great for spaghetti, linguine, fettuccine, or pappardelle, which aren't too thin.

Start by preheating a skillet over medium-high heat. Once hot, add in the zucchini noodles. (Make sure the skillet really is hot, so the zoodles cook quickly instead of simmering in their own juices). You don't need to add any oil or water into the pan because the heat will cause the noodles to release moisture.

Toss the zucchini noodles lightly with pasta tongs and cook, uncovered, until al dente. The time will vary depending on the size and the shape of the noodles but 2-3 minutes is usually all you need. The longer the zucchini cook, the more moisture gets released, so don't let the noodles cook for too long. If you’re cooking more than 1 spiralized zucchini, it may take up to 5 minutes to cook the zucchini thoroughly. Just keep tossing so that all zucchini noodles hit the bottom of the hot skillet and cook through.

A lot of people recommend pre-salting the zucchini noodles (to get some of the moisture out first), but I find it unnecessary. The salt helps to draw the moisture out via the process of osmosis. Essentially, water moves across a cell membrane to try to equalize the salinity or concentration of salt on both sides of the membrane. In this case, the salt will also soften the zucchini. This works great for raw zucchini noodles, which are not further cooked, but not for sautéed noodles. Pre-salting and then cooking yields limp zucchini noodles. So, hold the salt (or any sauce you may want to add) until you're ready to serve the noodles. 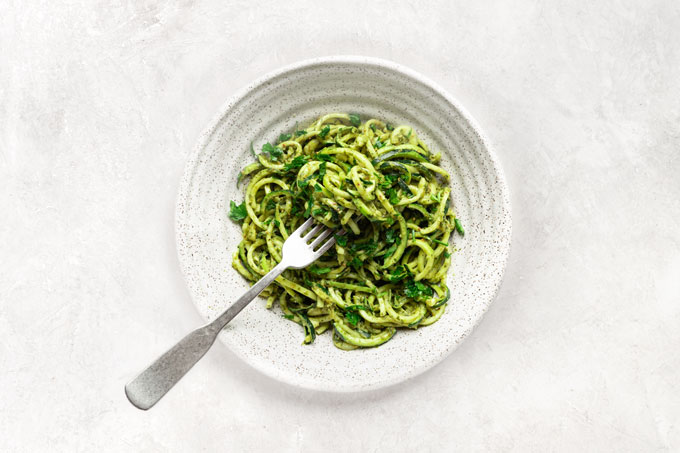 How to Blanch Zucchini Noodles

One of the simplest methods to prepare zucchini noodles is to boil them, just like regular pasta. While you would think that adding zucchini noodles to liquid would make them soggier, thanks to osmosis, it’s the exact opposite. When you add zucchini to liquid, the zucchini doesn’t release as much moisture, because it’s already in moisture. Instead, the liquid keeps the zucchini firm.

This method of cooking zucchini noodles is ideal for thin noodles in soups, such as angle hair, capellini or vermicelli. If you plan on tossing the noodles with sauces rather than using them in soup, I suggest the above method because the blanched zoodles will release moisture as soon as you take them out of the water (or broth) and become wet on the plate.

How to Bake Zucchini Noodles

Baking zucchini noodles is the method I use the least as it’s the most time-consuming and labor-intensive. The only type of zucchini noodles I bake on a regular basis is lasagna (and lasagna roll ups).

To begin, preheat the oven to 350°F/175°C. Spread the zoodles in a single layer onto a large baking sheet. The more spread out the zucchini noodles, the better. Toss the noodles with sea salt and bake them, uncovered, until al dente, about 10 minutes. The salt will help draw the moisture out and the dry air in the oven will dry the moisture out. Once baked, pat the noodles dry with paper towels to remove any remaining moisture. Top with your favorite sauce right before serving. 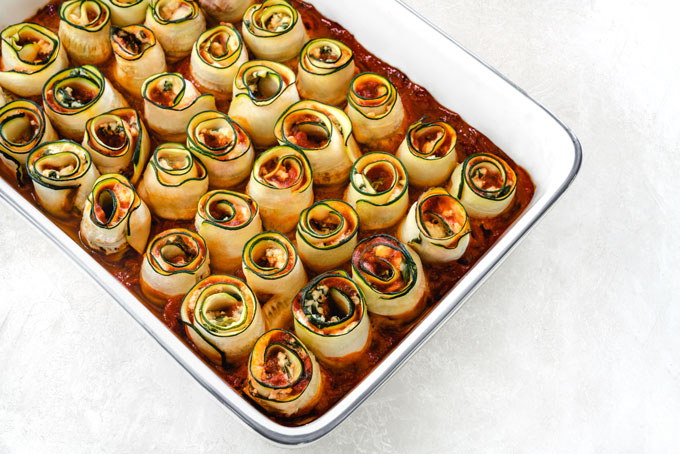 Now that you know all about ways to make zoodles and how to cook them so they aren’t watery, it’s time for zucchini noodles recipes.

Often times I just saute zucchini noodles in a little bit of olive oil, sprinkle them with salt and freshly cracked black pepper right before serving, and that's! But of course, you can also top the zucchini noodles with homemade marinara sauce, Alfredo sauce, pesto, or even hummus. All of these sauces are amazing on zucchini noodles.

I can't forget about zucchini lasagna (the recipe is in my cookbook), which a fresh take on a classic. The lasagna is loaded with veggies, but still has the rich flavors and scrumptious texture of a traditional lasagna. 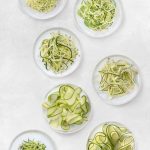 How to Make Zucchini Noodles

Learn how to make different shapes of zucchini noodles.
Servings: 2