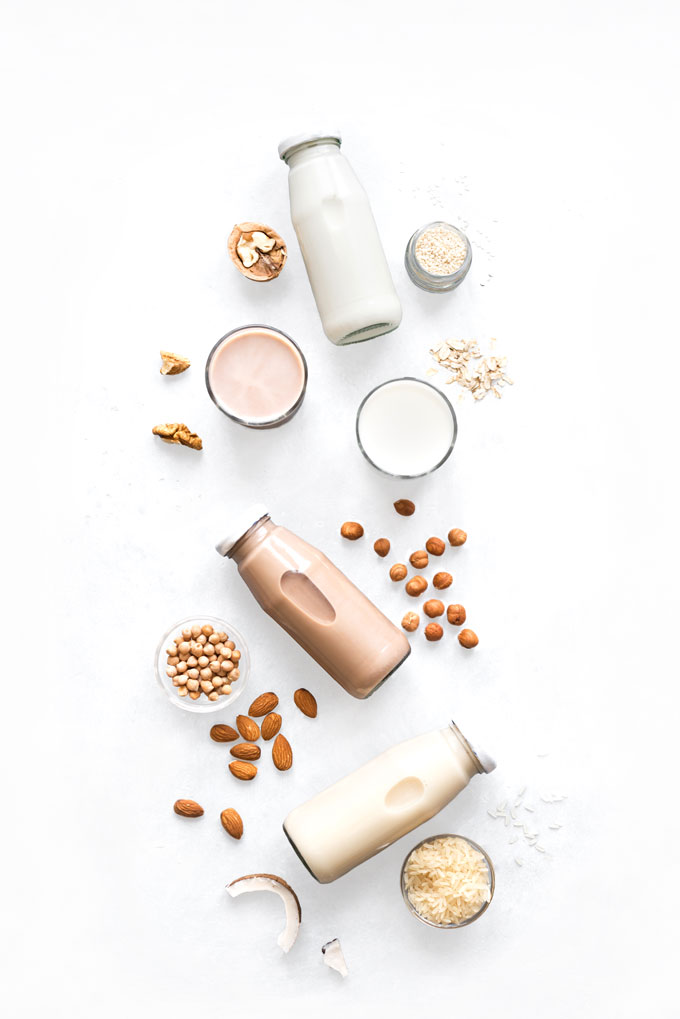 More and more people are deciding to give up dairy products. There are plenty of reasons for it, ranging from milk allergies and lactose intolerance to ethical principles. Fortunately, there are many plant-based milk alternatives both for drinking and cooking.

If you ask me, homemade plant-based milk tastes the best. It also contains all the micro and macro nutrients of the nut/seed/grain/legume you use.

Store-bought plant milk is pasteurized (heated up to very high temperatures), so it can last 1-3 years on the store shelves at room temperature. Manufacturers also often skimp on the base ingredient to save money and use thickeners to keep the non-dairy milk from being overly watery. Then they add natural flavors to enhance the taste and oils to improve the texture.

With limitless choices from almond, cashew, coconut, flax, hazelnut, hemp, macadamia, oat, rice, soy, walnut, and even pea milk, the options can be overwhelming. So which are the best non-dairy milk alternatives? And how do these different plant milks compare nutritionally? It all depends on what you're looking for.

Almond milk is one of the most widely consumed plant-based milk varieties (it's been around since the 13th century!). It's nutty, slightly sweet, and light. In fact, almond milk can be quite watery as many brands only contain 1-2% almonds.* (1, 2)

One (240 ml) cup of store-bought unsweetened almond milk contains 30-40 calories, 2.5-3.5 grams of fat, 1 gram of protein and 1-3 grams of carbohydrates.* (2, 3, 4, 5, 6, 7, 8) Commercial almond milk is one of the lowest-calorie nondairy milks available and is a great for those wanting to lower the number of calories they’re consuming. The downside is that almond milk is not only low in calories, but also low in protein, fiber, and healthy fats. Another issue with this milk alternative is that almonds require a lot of water to grow (although it's still less than the amount of water required to produce dairy milk).

I usually use almond milk in smoothies (this chocolate ice cream smoothie is my favorite), smoothie bowls, porridge, and sweet baking recipes. It's not ideal in savory cooking (as the nutty flavor can easily overwhelm other flavors) or hot drinks (as it's liable to splitting and curdling).

Cashew milk has recently gained popularity as a milk alternative, and for a good reason: it’s slightly sweet, creamy, rich, and the closest non-dairy milk alternative to cow's milk. The flavor profile of cashew milk is very similar to that of almond milk. However, cashew milk is much more versatile than almond milk because it lacks nuttiness and lets other flavors come to the forefront.

One (240 ml) cup of store-bought unsweetened cashew milk contains 25-50 calories, 2-4 grams of fat, 1-2 grams of protein and 1 gram of carbohydrates. (9, 10, 11) Unlike most other nut milks, cashew milk doesn't have to be strained. So, all the nutrients found in the whole cashew nut are still present in the milk.

Cashew milk makes a great base for non-dairy cultured food (such as cultured butter, sour cream, or even cheese), creamy soups (such as this cream of broccoli soup), cheesy sauces, and as a substitute for cow's milk in desserts (think pancakes, crepes, muffins, ice cream, or even frozen hot chocolate). Since cashew milk doesn't separate or curdle in a presence of an acidic medium, it's also perfect as a coffee creamer. 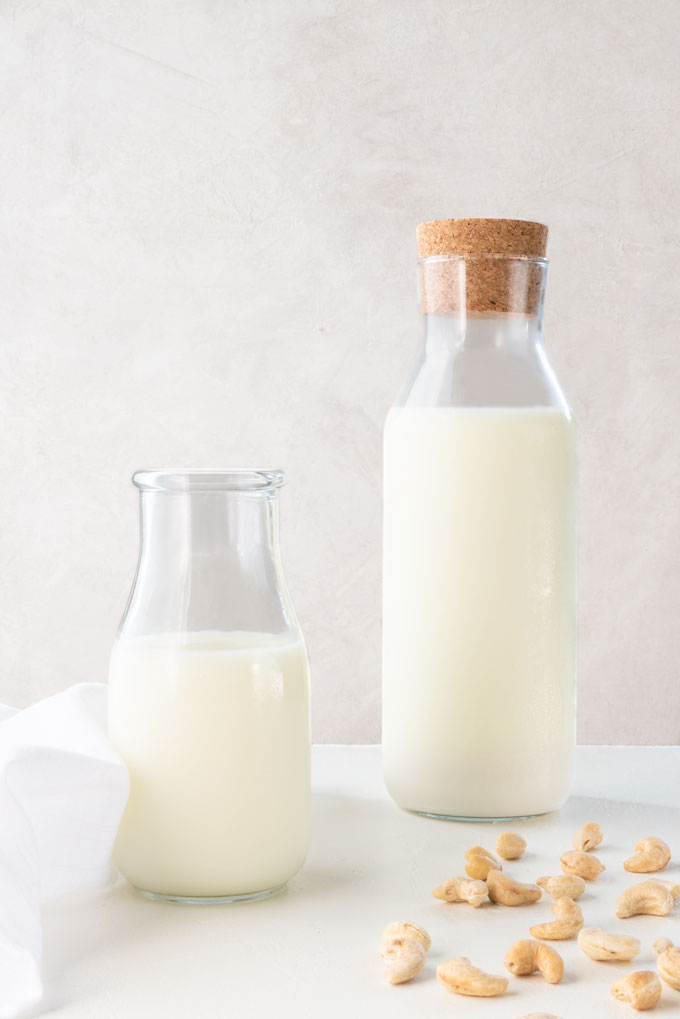 Coconut milk in a carton is a watered down beverage, different from the thick cream you find in cans for making many Asian dishes. It has a sweet but subtle coconut flavor and a creamy, rich texture.

One (240 ml) cup of store-bought unsweetened coconut milk contains 45 calories, 4-5 grams of fat, no protein and 0-1 grams of carbohydrates (12, 13, 14, 15). The fat content, specifically the medium chain triglycerides (MCTs) that are absorbed by the body for energy, is really what separates coconut milk from other plant-based options.

Flaxseed milk can generally be described as nutty, though not in the same way as almond milk. Whereas almond milk has a natural sweetness, flax milk tends toward the earthier side (although it's not as earthy as hemp milk). There is a slight creaminess and surprisingly smooth consistency to flax milk that is comparable to 1% dairy milk.

One (240 ml) cup of store-bought unsweetened flax milk contains 70 calories, 2.5 grams of fat, 8 grams of protein, and 2 grams of carbohydrates. (14) Flax milk is filled with omega-3 fatty acids, lignans, and many vitamins and minerals, so it doesn't require the fortification other plant-based milks might.

Whenever I have flax milk on hand, I use it for recipes (mostly baked goods) that don't call for milk to create creaminess. Flax milk also works great in these raw pancakes.

Neither as common or as popular as other plant-based milks, hazelnut milk is actually one of my favorite milk alternatives. It has a divine hazelnut-y flavor that is reminiscent of a decadent dessert. Perhaps that's why Nutella is so addicting. It's slightly more nutty than almond milk, and creamier and richer than cashew milk. 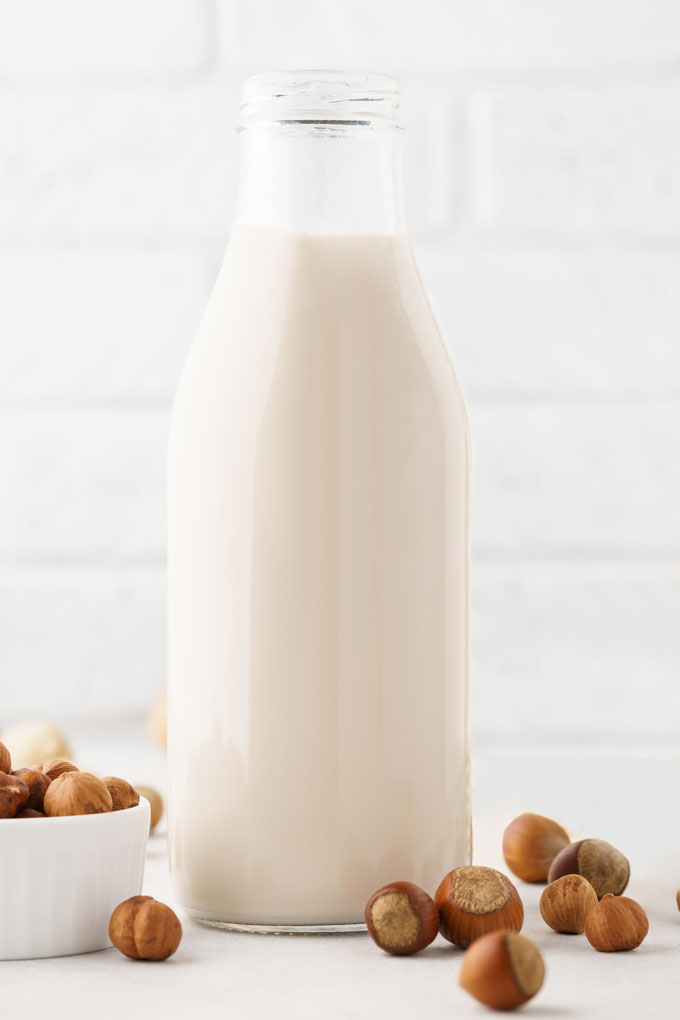 Hemp seeds taste a bit like a cross between sunflower seeds and pine nuts, which means that hemp milk has a slightly nutty and earthy, grassy flavor, which is not palatable to a lot of people. The texture of most store-bought hemp milks is very similar to skim milk - thin, almost watery.

Hemp milk works best in savory dishes (such as this cream of mushroom soup). However, because hemp milk offers a lot of nutrition, I also use it in smoothies and smoothie bowls where I can easily hide its earthy flavor.

Macadamia milk is fairly new to the market. It has a richer, smoother, and creamier texture than most non-dairy milks, and a slightly sweet, almost fruity, flavor.

One cup (240 ml) of store-bought unsweetened macadamia milk contains 50-53 calories, 5 grams of fat, 1 gram of protein, and 1 gram of carbohydrates. (20, 21). Macadamia milk is a great source of healthy monounsaturated fats (3.8 grams per cup). It's also low in calories in comparison to other plant milks.

Macadamia milk is one of the most popular milk alternatives in raw desserts (as an alternative to cashew milk). This is because cashew milk isn't usually made with truly raw cashews.

One (240 ml) cup of store-bought unsweetened oat milk contains 70-130 calories, 2-3.6 grams of fat, 1-4 grams of protein and 8-25 grams of carbohydrates. (22, 23, 24, 25, 26) During the process of making oat milk, the oat’s fiber and beta-glucan (a type of soluble fiber) is preserved. So, oat milk is a great option for those looking to increase their fiber intake or further regulate their digestive system. Beta-glucan also binds to cholesterol, reducing its absorption in the body.

Oat milk works great in cereal, muesli, and can be used to add texture and thickness to smoothies. Oatly has developed a barista edition oat drink from liquid oats, which means that the oat milk is not excessively heavy or chalky. It froths well and makes a nice latte.

Pea milk is relatively new to the plant milk scene. It's earthy, thick, and chalky.

One (240 ml) cup of store-bought unsweetened pea milk contains 70-90 calories, 4.5-5 grams of fat, 8-10 grams of protein, and 0-1 grams of carbohydrates. (27) Unlike other plant-based milks, pea milk is comparable to cow's milk in protein content. It's an excellent choice for protein-seekers who have nut allergies or sensitivities.

To be honest, I don't use pea milk all that often. The only time I include it in my diet is when I need to boost a veggie-based, nut-free protein.

Rice milk has one of the most neutral tastes of all the non-dairy milk alternatives (it doesn't taste rice-y at all). It closely resembles skim milk, but it's just a touch sweeter.

One (240 ml) cup of store-bought unsweetened rice milk contains 70-125 calories, 2.5 grams of fat, 0-2 grams of protein, and 11-25 grams of carbohydrates. (28) Rice milk is one of the least allergenic plant milks. However, it's also very low in nutrients and very high in carcinogen arsenic (unless a brand says that they test their rice milks for arsenic). Rice milk is also higher in sugar than most non-dairy milks.

Light and refreshing, rice milk is one of the most favorite plant milks for drinking. (It's the only store-bought milk that my husband uses in his cereal). It's also great in coffee because it barely affects the coffee taste and is not prone to splitting.

I don't really use sesame milk because the bitter flavor is just too overpowering for me.

Perhaps the most widely available vegan milk, many consider soy milk one of the best milk alternatives. It's slightly sweet with a mildly chalky finish, and a creamy texture.

One (240 ml) cup of store-bought unsweetened soy milk contains 80–90 calories, 3.5-4 grams of fat, 7–9 grams of protein and 3-5 grams of carbohydrates. (29, 30, 31) Just like hemp milk, soy milk is a source of complete protein. The problem with soy is that most soy today contains phytoestrogens (estrogen mimickers in the body). Another big deal is that 90 percent (!) of soy today is genetically modified.

The most popular use of soy milk is in baking mixes because it curdles well. (Soy milk makes for a great buttermilk, for instance). While I don't personally use soy milk (I only consume fermented soy products*), many people opt for soy milk as a drinking milk or with cereal.

*The fermentation process increases the bio-availability and digestibility of beneficial soy nutrients and neutralizes the enzyme-inhibitors and anti-nutrients.

Walnut milk may not be an everyday milk, but it's delicious. It has a delightful nutty flavor without the bitterness of walnuts, and a creamy, thick texture.

One (240 ml) cup of store-bought unsweetened walnut milk contains 40-120 calories, 3.5-11 grams of fat, 1-3 grams of protein, and 1-2 grams of carbohydrates. (32, 33) Walnut milk is alkaline-forming, and loaded with omega 3 fatty acids and several antioxidants that are rare and unique to only a few commonly eaten foods. Phytonutrients like quinone juglone are found only in walnuts, and others like tannin tellimagrandin or the flavonol morin are also powerful and found in very few foods.

If you've read my blog for a while, you probably know that I make various plant milks at home - almond milk, cashew milk, coconut milk ... This is mainly because my husband and kids don't like the taste of store-bought plant milks. Personally, I don't mind the taste. I simply don't appreciate the long ingredient list of additives I can't even pronounce.

However, if you are not into homemade plant milks, there are a few really clean brands.

One of my favorite is Elmhurst Milked, which is about as pure as you can get (I am not an affiliate, just a fan). All Elmhurst plant milks and coffee creamers are crafted through a patented HydroRelease™ technology, using water to liberate nutrients from raw grains, nuts, and seeds. These nutrients then recombine naturally to form a smooth, creamy beverage without the need for industrial additives. Elmhurst nut milks usually contain only two ingredients - almonds/cashews/hazelnuts/walnuts and water. 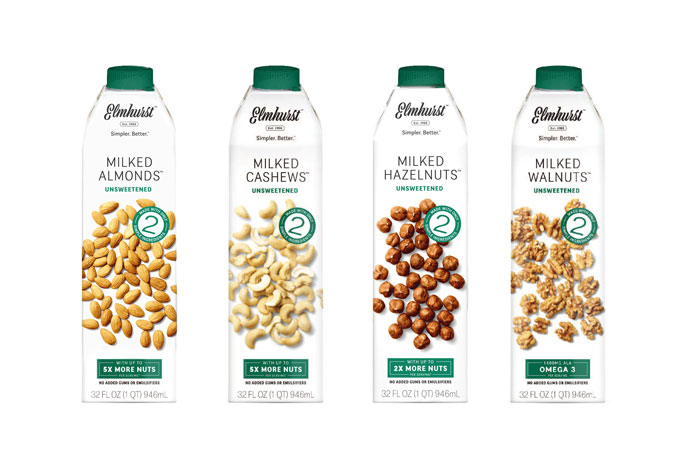 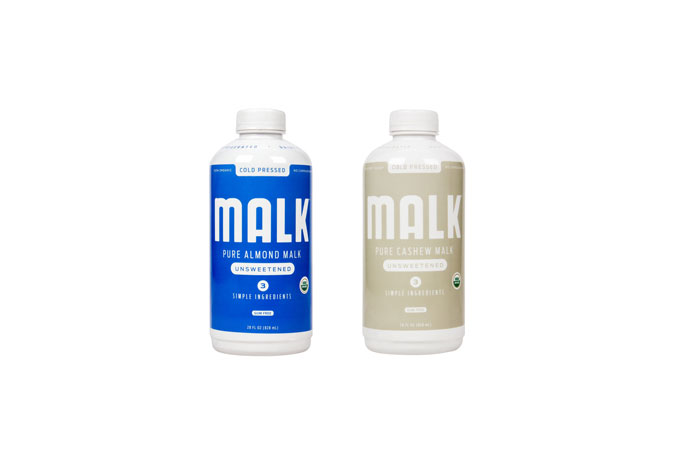