Anyone can pour some oil into a pan and cook. But choosing the right cooking oil can mean a difference between a tasty, nutritious meal, and a smoke alarm going off over your burnt food. Depending on whether you plan to bake, broil, grill, fry, deep-fry, or roast, different cooking oils will produce different results.

Now, I’m not suggesting that you go out and buy a dozen different cooking oils, but you might benefit from having more than just one in your kitchen for sure. So what should you consider?

hover over each oil to see its name

The best oils for cooking are those that remain stable even under high temperatures. Stability depends on how easily the cooking oils oxidize; that is, how easily they react with oxygen to form free radicals. The most important factor in determining oil’s resistance to oxidation is the relative degree of saturation of the fatty acids in it. Let me explain.

Saturated fatty acids have their carbon chain completely filled (saturated) with hydrogen atoms. This saturation yields a highly stable structure that resists oxidation. Saturated fatty acids are found in tropical oils – such as palm oil and coconut oil – and animal fats – such as butter or ghee. These oils and fats are the most suitable for deep-frying and cooking under high temperatures. (1)

One of the most important things to consider when consuming PUFAs is their ratio of omega-6 to omega-3. Whereas back in the day the omega-6 to omega-3 ratio in a diet was about 1:1, today it's about 16:1. (2)  This is a recipe for disaster because omega-6s are pro-inflammatory, while omega-3s are anti-inflammatory. (3) Research is clear that inflammation contributes to various diseases, including cardiovascular disease, arthritis, liver disease, depression, and even cancer. (4, 5, 6, 7)

The ideal situation is less total PUFA with lower ratio of omega-6 to omega-3.

The smoke point is literally the temperature at which the oil stops simmering and starts smoking. The more stable the oil, the higher its smoke point is. When oil is heated past its smoke point, it decomposes – it loses its beneficial nutrients, generates toxic fumes, and creates harmful free radicals. Also, when there’s smoke, it means the oil is very close to its “flash point” – the point at which it may catch on fire.

There are two different types of oils: unrefined and refined.

Unrefined cooking oils occur exactly as they do in their plant form. They are mechanically extracted from their oily parts through crushing and pressing and then left in their virgin state. This extraction process preserves their high flavor and nutrients, making them a healthier choice.

Unfortunately, unrefined cooking oils (and their nutrients) don’t play well with heat. They tend to have a low smoke point and are most suitable for drizzling, dressings, and lower temperature cooking. Another disadvantage of unrefined oils is their short shelf-life. As a result, many of them aren’t even available for purchase in their unrefined form.

Doesn’t sound too healthy, does it? The number one reason manufacturers refine oils is to produce neutral flavor, longer shelf-life, and a high smoke point.

If you need oil for a higher-heat cooking or oil that doesn't have a strong flavor, look for naturally refined cooking oils, using lower temperature and natural agents like citric acid. Refined coconut oil is one of the best.

Many refined oils also undergo a process known as hydrogenation. Hydrogenation involves adding hydrogen into omega-6 polyunsaturated oils to prevent them from going rancid and to make them solid at a room temperature, primarily as a cheaper and less perishable alternative to butter in the form of margarine and shortening.

Hydrogenation produces trans fatty acids (trans fats), which are particularly dangerous to human health. These artificially saturated fats are difficult for the body to metabolize and remain "stuck" in blood circulation, contributing to an increased risk of cardiovascular disease and cancer. (9, 10)

Some of the most commonly hydrogenated oils include corn, cottonseed, safflower, and soy. But theoretically, almost any polyunsaturated oil can be hydrogenated.

This section only applies to olive oil. If you've ever shopped for olive oil, you've most likely been greeted with an array of choices. 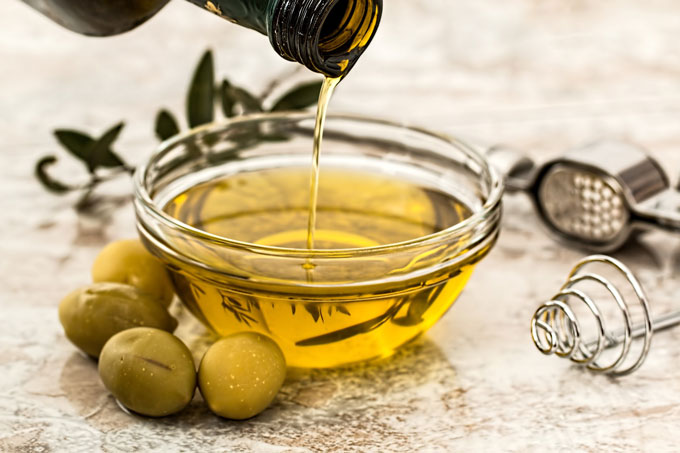 Extra-virgin olive oil is an unrefined olive oil and the highest quality oil you can buy. There are very specific standards olive oil has to meet in order to deserve the label "extra-virgin". It  contains no more than 1% of oleic acid and typically has a golden-green color and a true olive taste.

Pure (regular) olive oil is usually a blend of virgin olive oil and refined olive oil. It's a lower-quality oil with oleic acid between 3-4%, lighter color, and mild flavor.

Light olive oil is a refined lowest quality olive oil. The term "light" doesn't refer to calories, but to a lighter (neutral) flavor. Out of all the types of olive oil, light olive oil has the highest smoke point. (11)

The quality of the original raw ingredients (nuts, seeds, grains, legumes, fruit) is crucial in determining the eventual quality of the fat. Organic oils are much better than their non-organic counterparts. The reason is that pesticides are fat-soluble and accumulate in plant’s fatty acids. And since oils are very concentrated, pesticides and other environmental toxins pack more punch in a small amount.